Other than the hipster cafe trend, I realize the current cafe scene circles around K-culture as well!!
Saw many rising Korean-styled cafes/bakery/restaurants that originated from Korea.
and one of them would be Caffe Bene, who brought one of Korea's most loved desserts into Malaysia -- the Pat Bingsu! 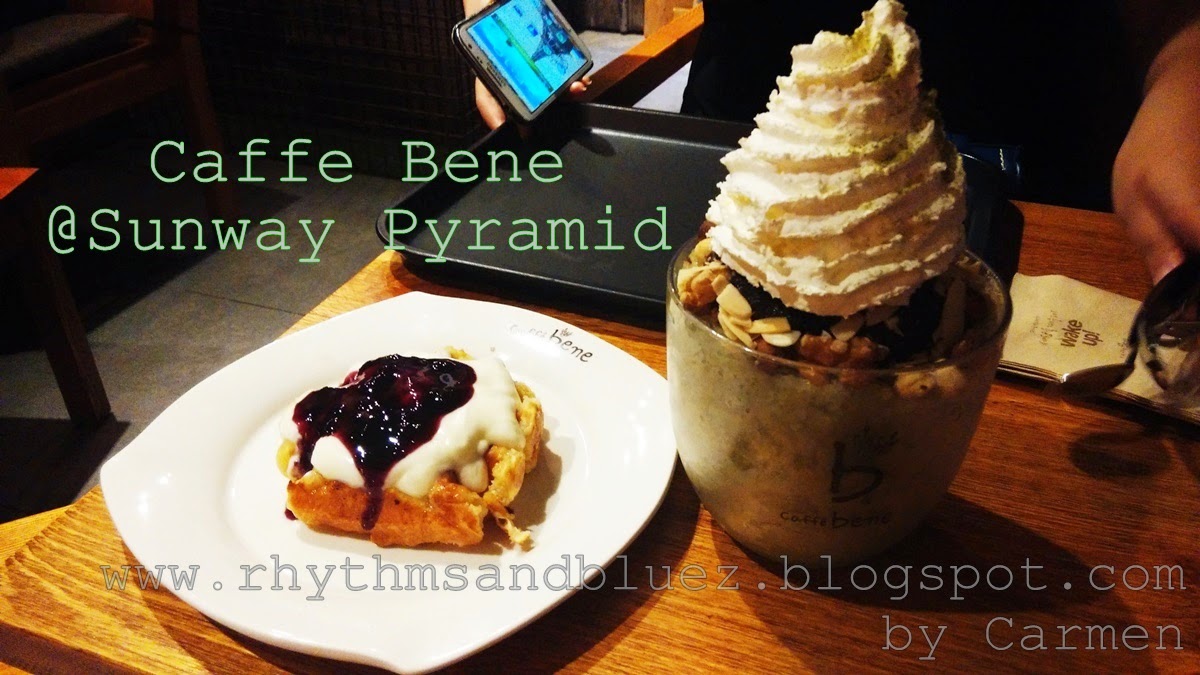 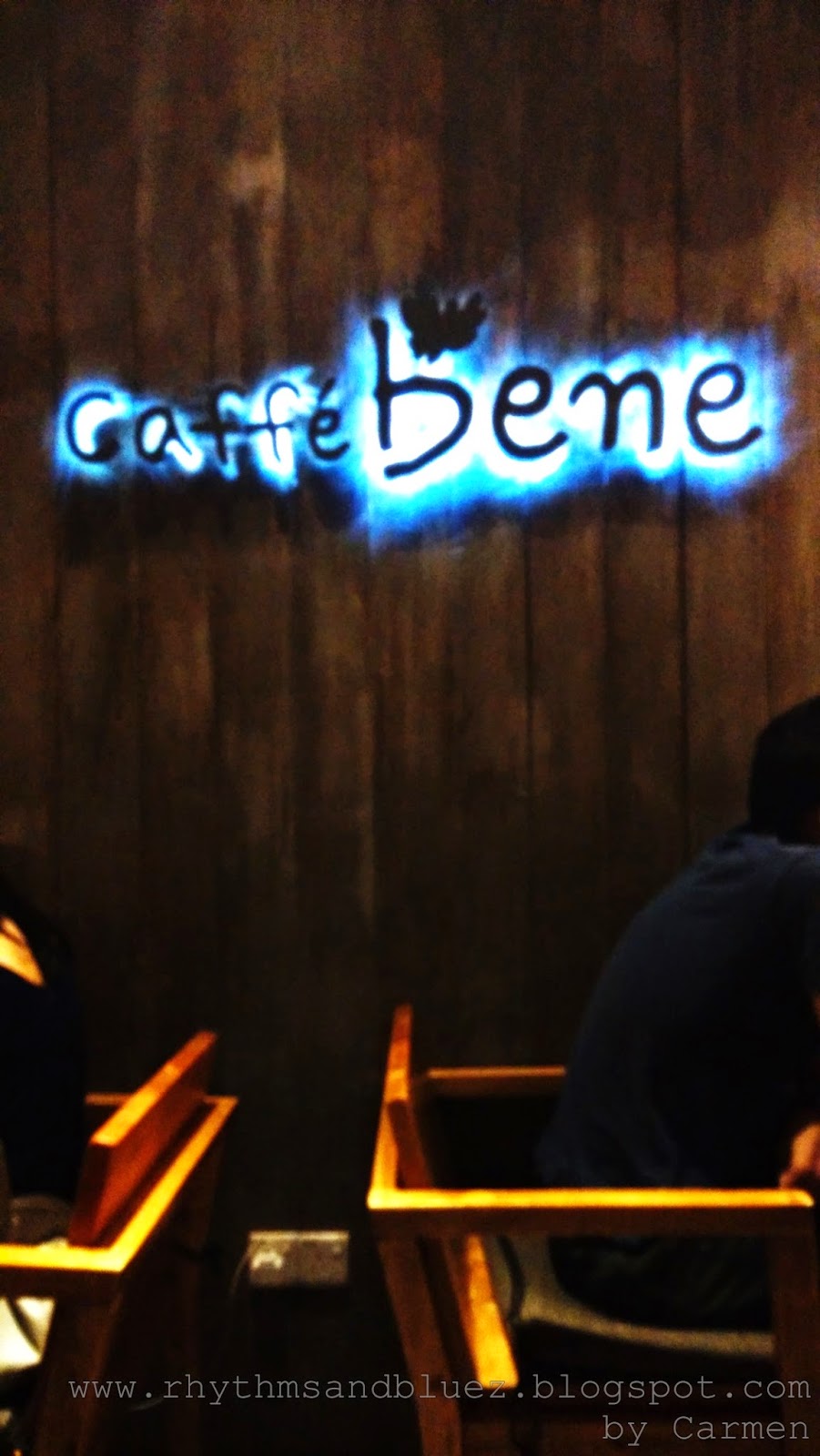 the cafe was under renovation, so there were limited spaces only
anyways, this cafe looks pretty much like a Starbucks outlet
lots of earth tone, sophisticatedly packaged snacks/coffee/tea/sweets
da whole concept is like Starbucks but Crushed-Ice version. 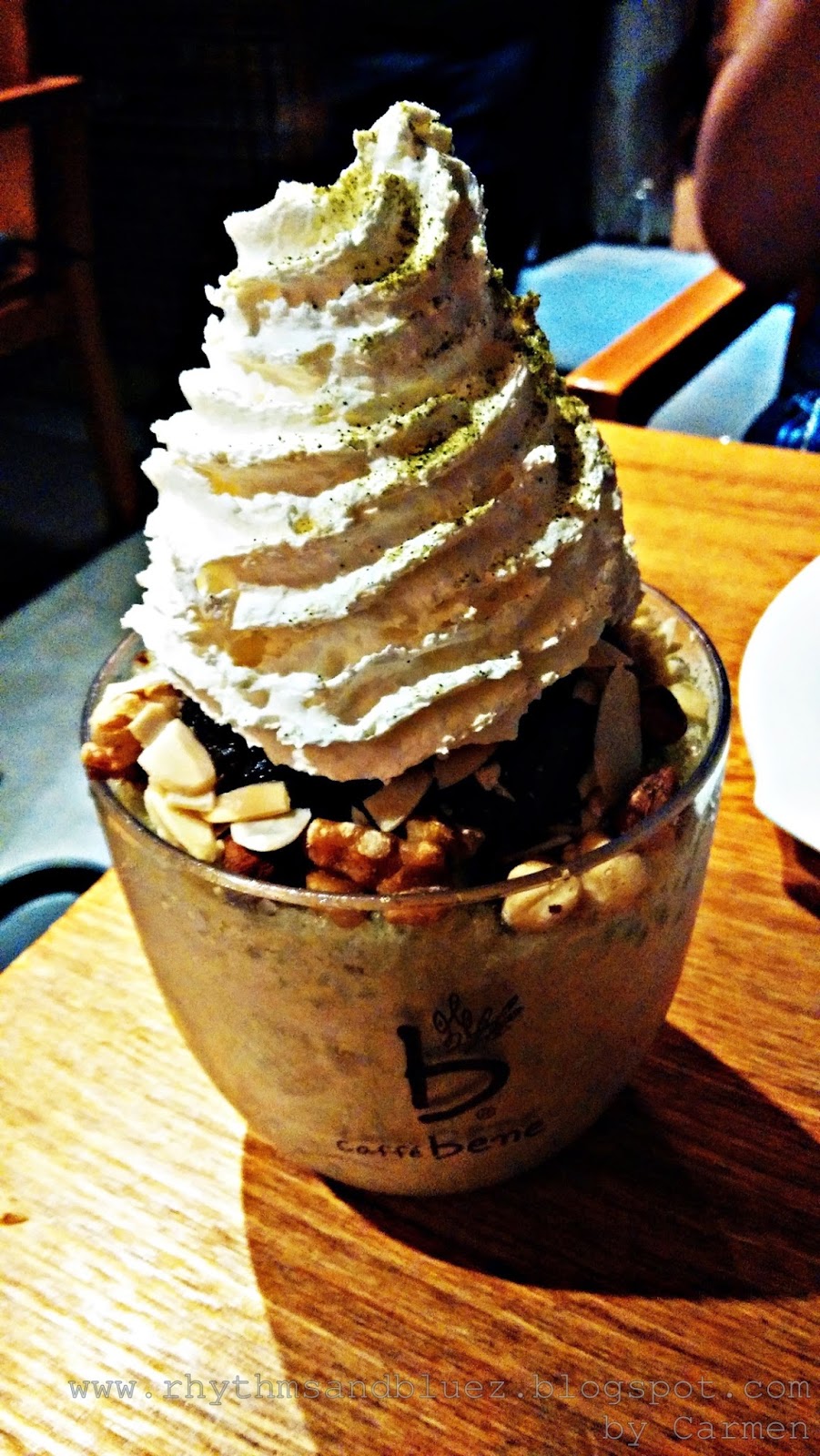 Green Tea Bingsu -- RM12.80
I know a dessert made of ice shouldn't cost that much
but looking at the amount of healthy toppings it has, I guess it's worth it

love the super crunchy mix of nuts, that gives you the extra texture while u're munching through the ice
redbean, walnuts, almonds, macadamia etc
the ice, are coarsely crushed, like mini pebbles of ice, which gives an extra chill and crunch
the red bean paste is super yummy, naturally sweet
the whipped cream on top gives a mild sugary taste to the ice
the green tea ice taste great! not too milky or too bitter
It's a new trend in desserts! 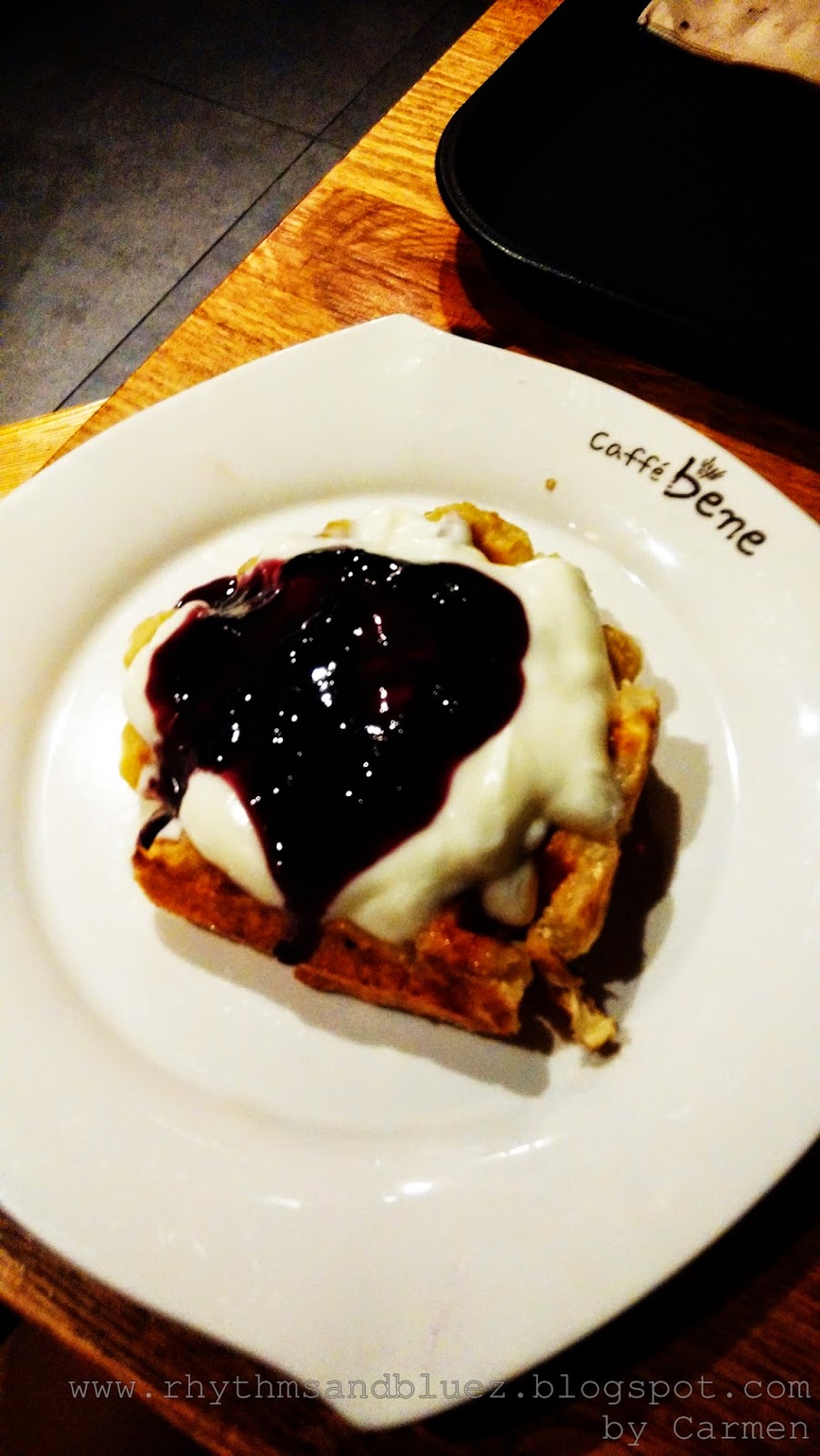 Blueberry Yogurt Waffle -- RM13.00
while we were ordering, we saw the yummylicious display of gelato next to the cashier
wanted to have a waffle with gelato on it
so we ordered the Blueberry Yogurt flavor gelato
But turns out, LOL, there's a special flavor of waffle which is called Blueberry Yogurt as well

so yea, instead of the gelato waffle, we end up having this "too damn healthy" waffle LOL
with blueberry sauce and original yogurt on top
yogurt was extremely sour, my mouth was watering non stop the moment i taste it
well though it was kinda hard to accept at first, but after a few bites, we agreed that it's a nice complement to the rather sweet Greentea Bingsu
Waffle is rather dense with slight crunch. 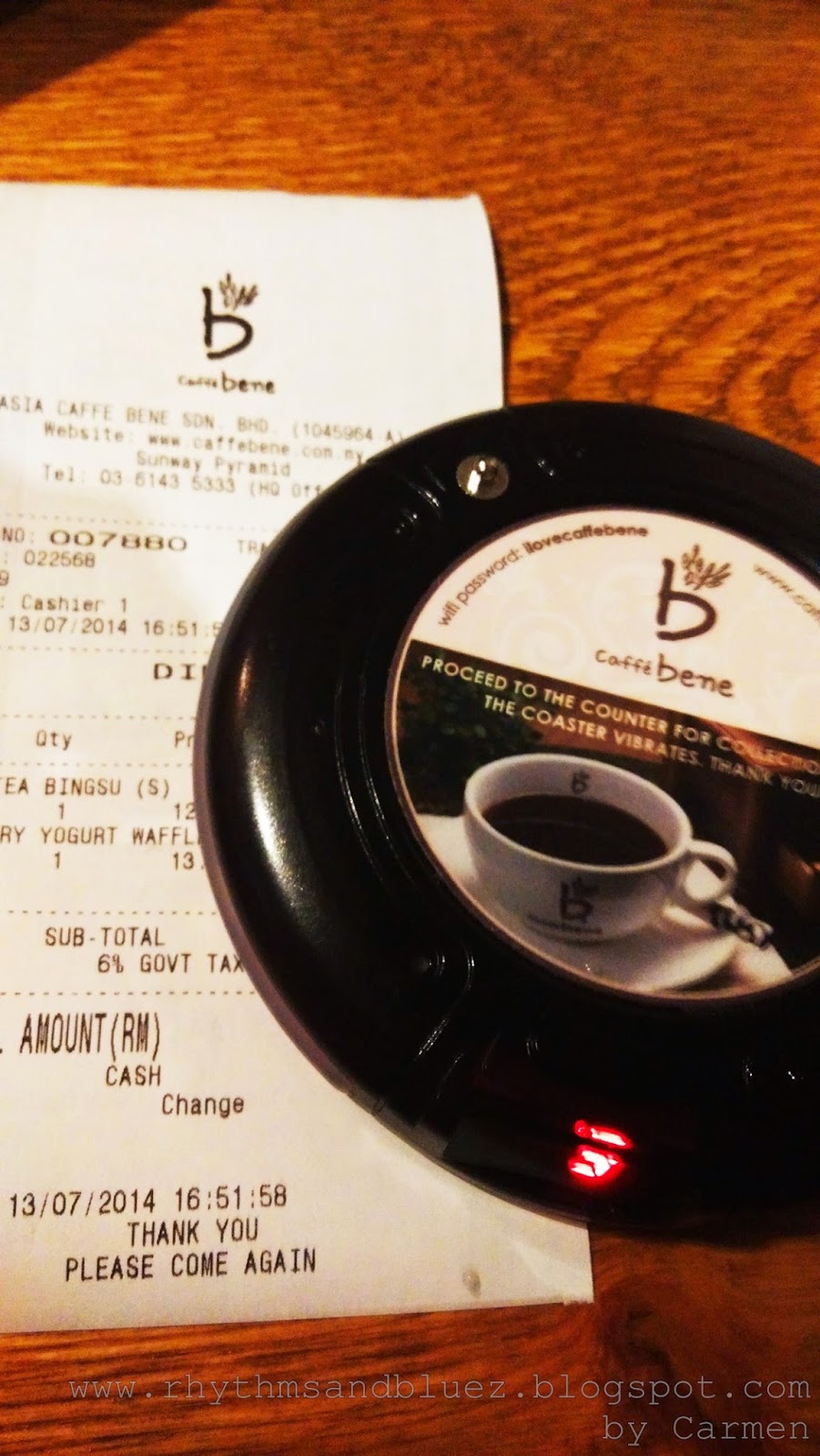 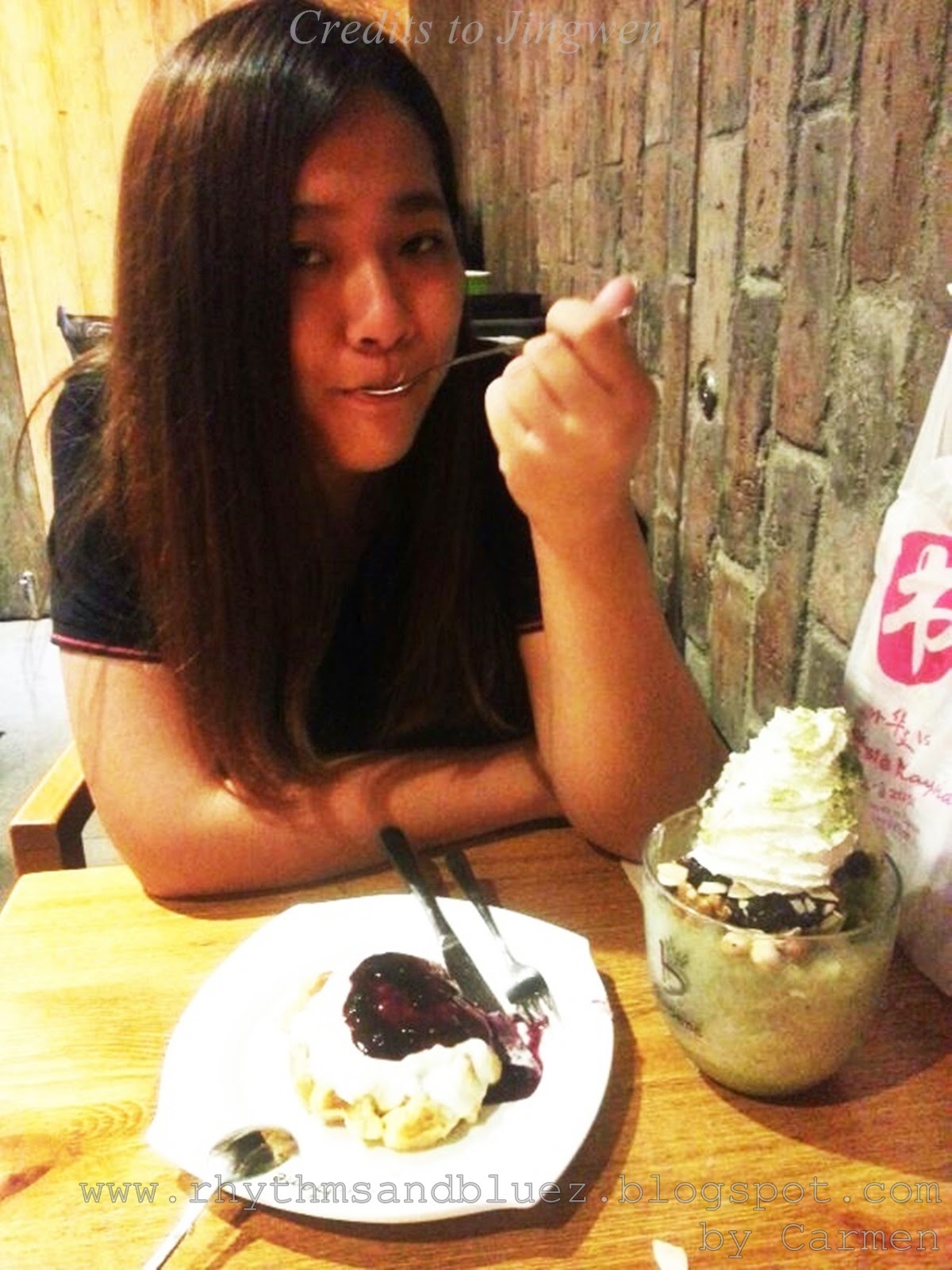 with Jingwen who love all things korean, just like me heheh 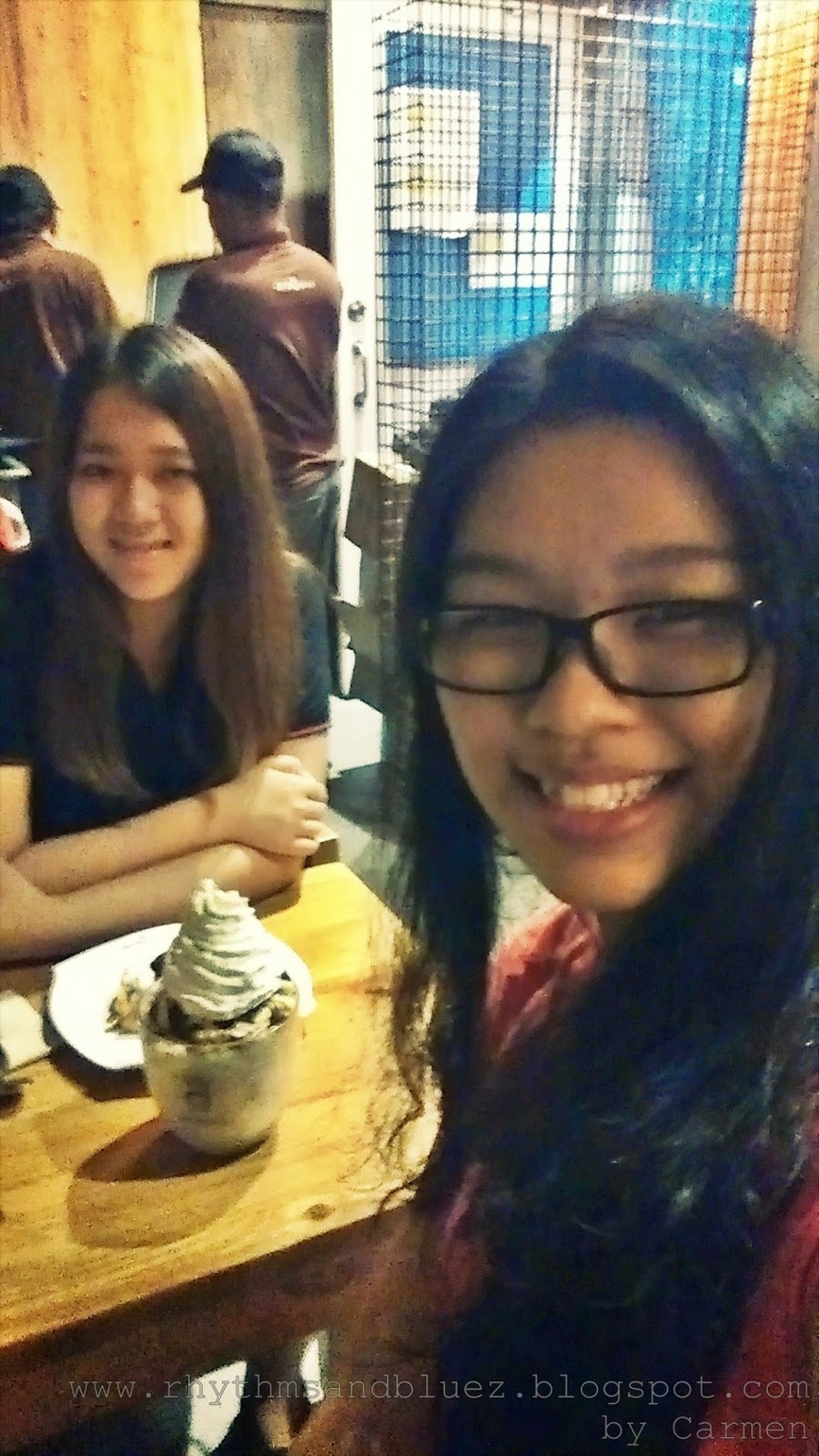 I think Caffe Bene was successful as it's the pioneering cafe that brings in the unique-star Bingsu from Korea. With the super strong influence of K-culture, this cafe attracted so many youngsters, who wants to be part of the K-culture and also to try something new, unlike the usual coffee-and-cakes cafe. The menu is still quite impressive as they serve other mainstream desserts and beverages as well.  will come back to try out their coffee and other flavors of bingsu!! 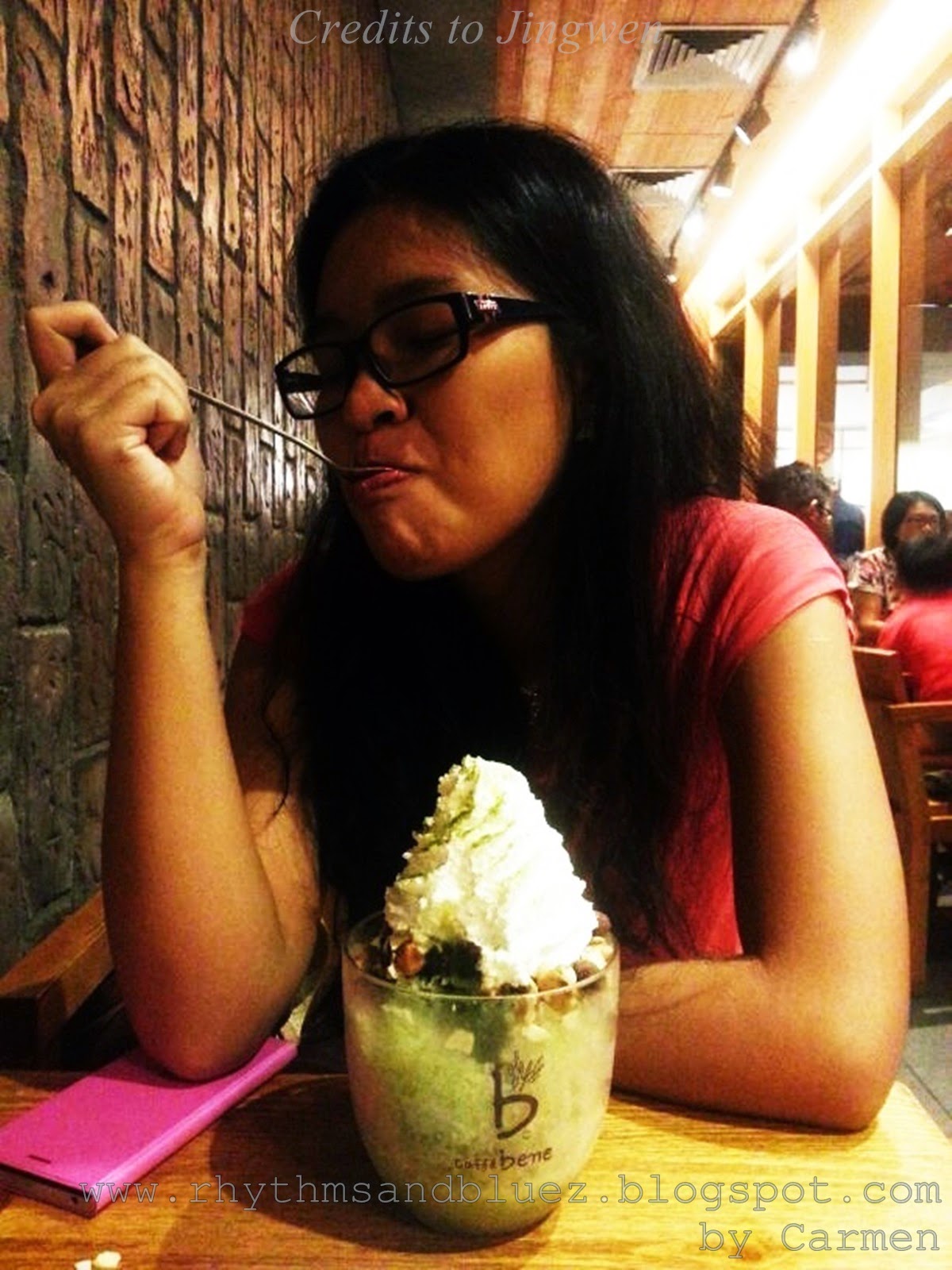 Click the link below for the location of Caffe Bene at Solaris Mont Kiara
http://caffebene.com.my/outlets/
Posted by Carmen JW at Thursday, August 28, 2014 No comments:

Just now met cousin's friend, who told me that my blog was on top of the list when she googled for JB cafes! haha...gt 暗爽 abit when she say my blog is quite popular LOL
kay la...now post another cafe hop in PJ
omg i wrote this like 2 weeks ago, but now oni post....zzzzzzz

Just finished camp
and it's time to quickly post my cafehop reviews...
This was one week before I came back to SG
Was kinda bored at home, dad and mom knows my crave for Cafes and decided to bring me to one..
It's a first okay!!! Coz they hate cafes who sell drinks that are more expensive than the food. But they took me by surprise as they brought me to one of the most raved cafes in SS2.

The cafe was flooding with youngsters, the tables are closely knit and there's this huge wooden-spool table. Lights are dim, tables are mostly wooden ones with bright colored chairs to match with. Cakes were showcased at the rather simple and small counter. Very hipster I would say.

I was overwhelmed by the crowd, (even more with my parents beside me) coz they obviously don't like places like this haha...thought they are gonna complain but turns out they didn't lol...
Really got me wondered why this place is so awesome? 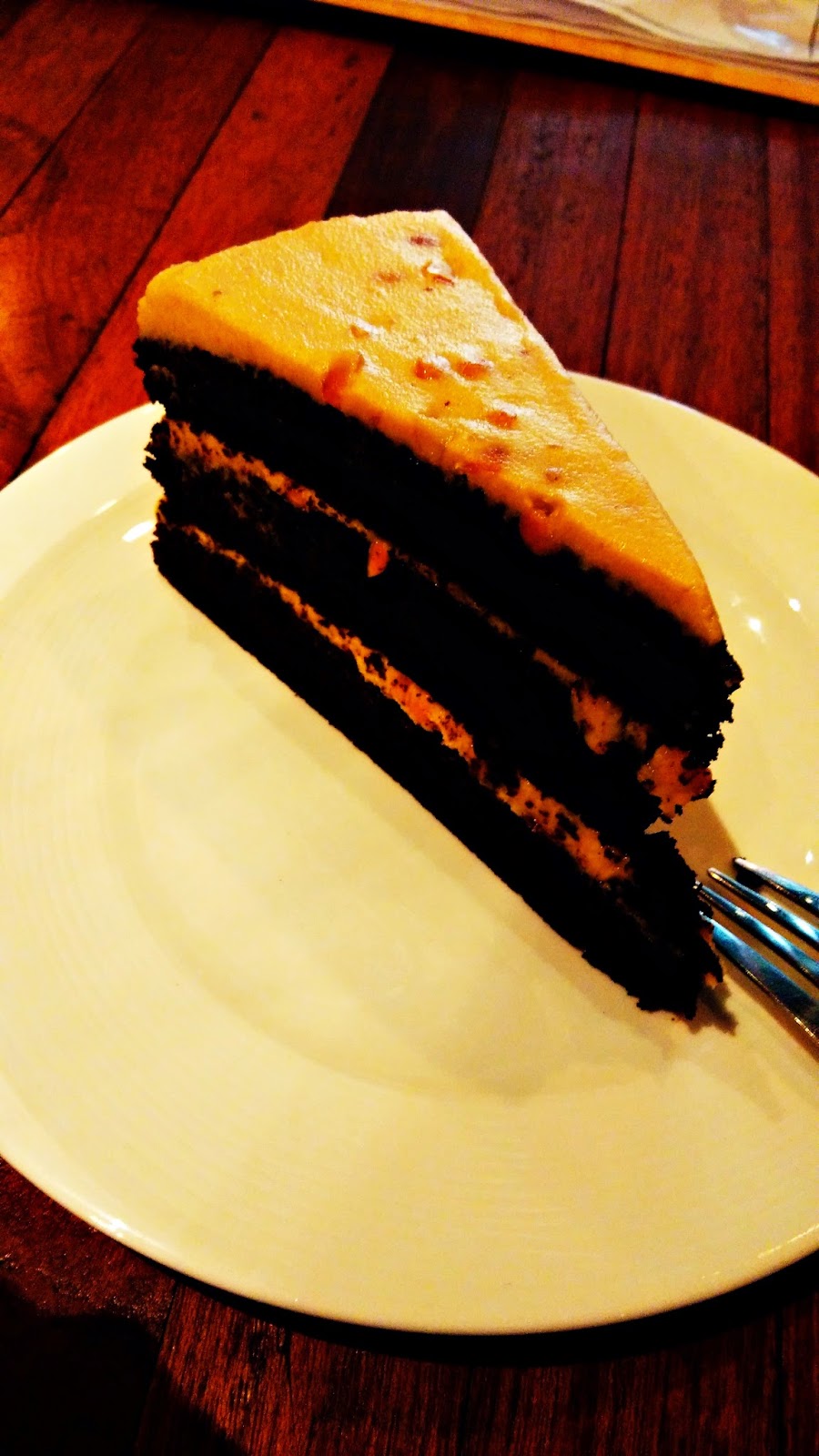 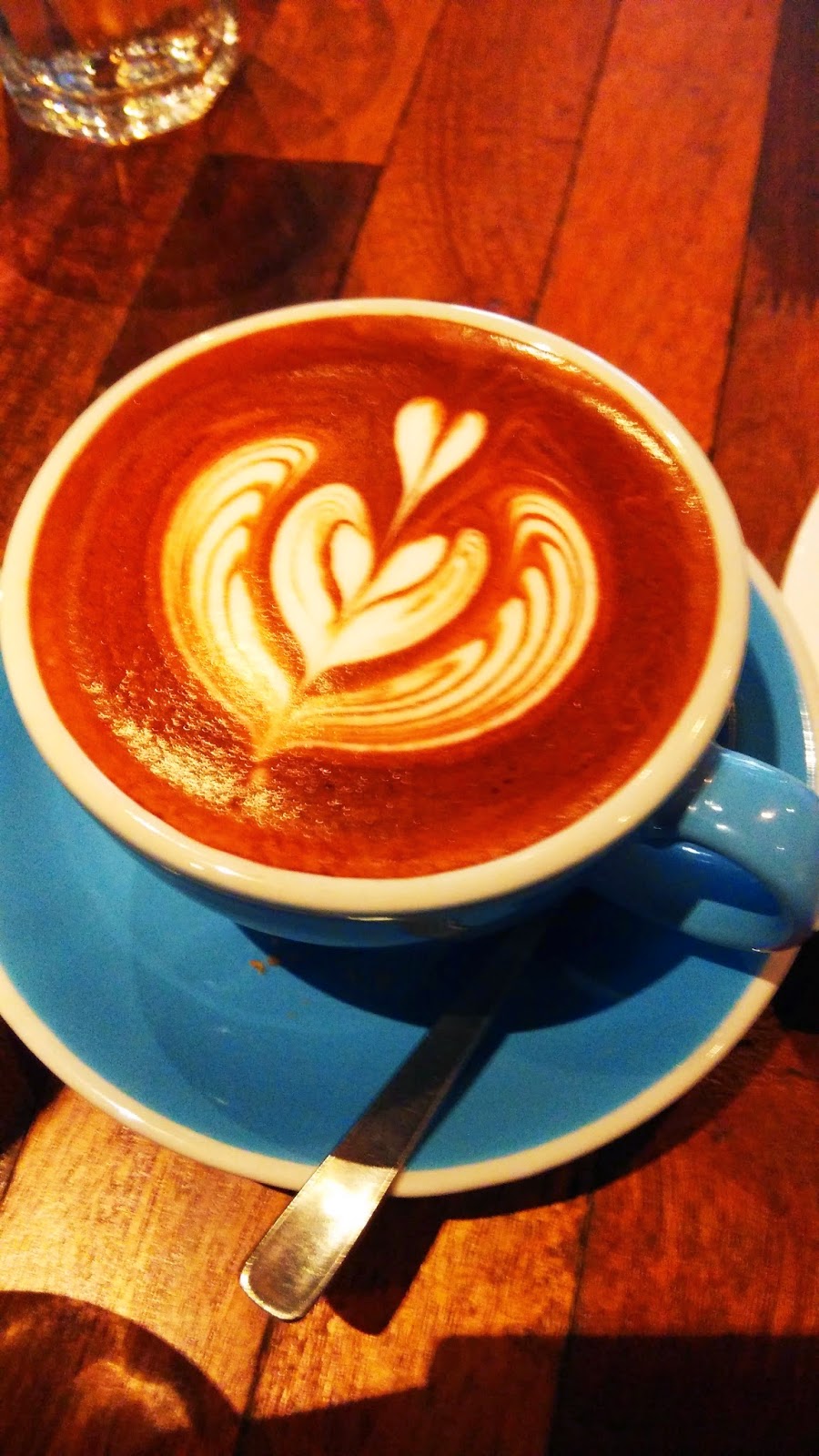 Hot Chocolate -- RM10.00
dad and mom are not specialty coffee people so they ordered a hot choco
Super strong cocoa taste, quite bitter, but it's nice overall 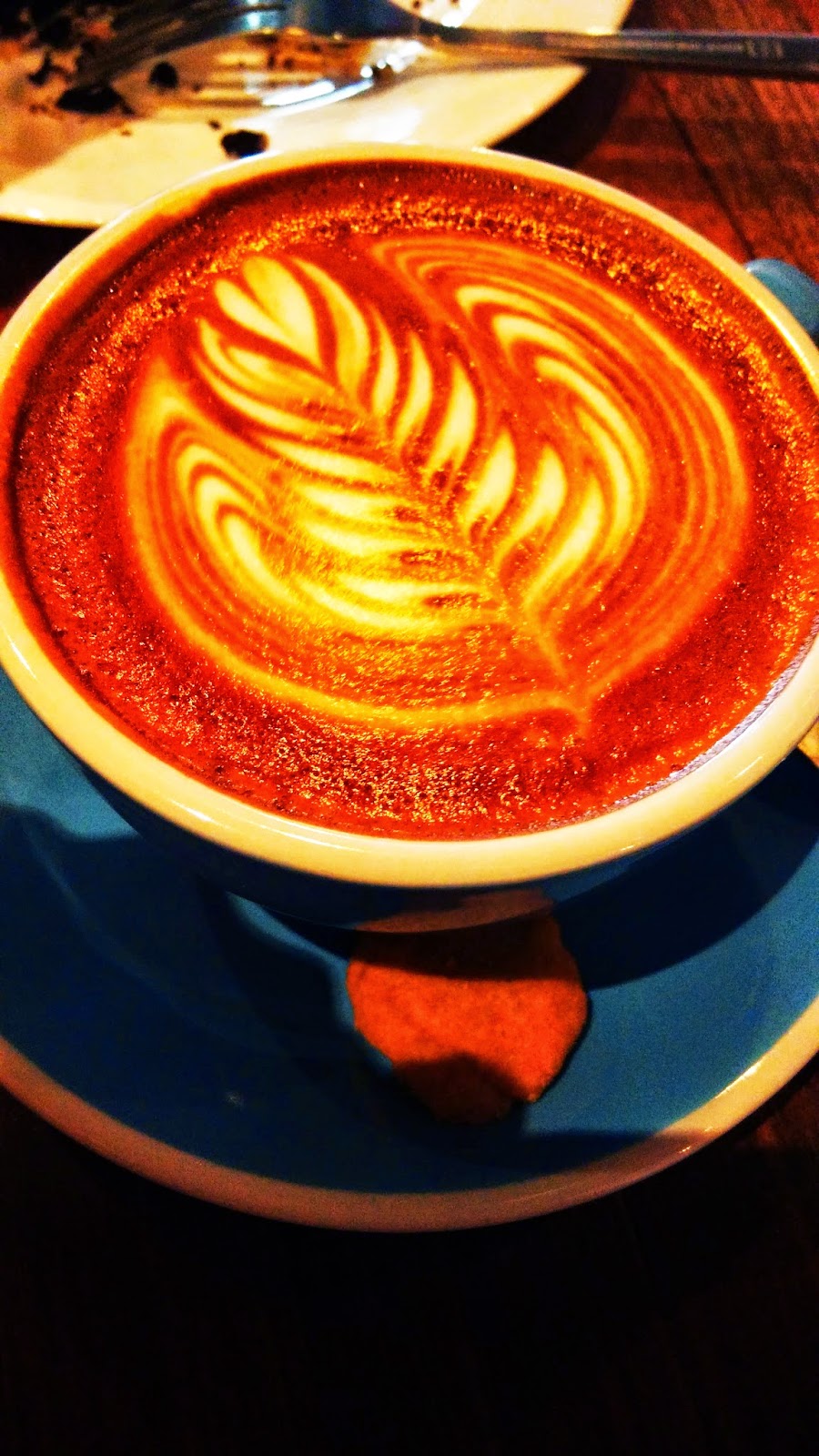 Flat White -- RM10.00
the first thing u can taste and smell is some herbs/spices kind of aroma
I guess they have their own blend of coffee beans
aroma is pleasant but the taste....hmmm
Sorry to say I'm not a big fan of the spice-coffee 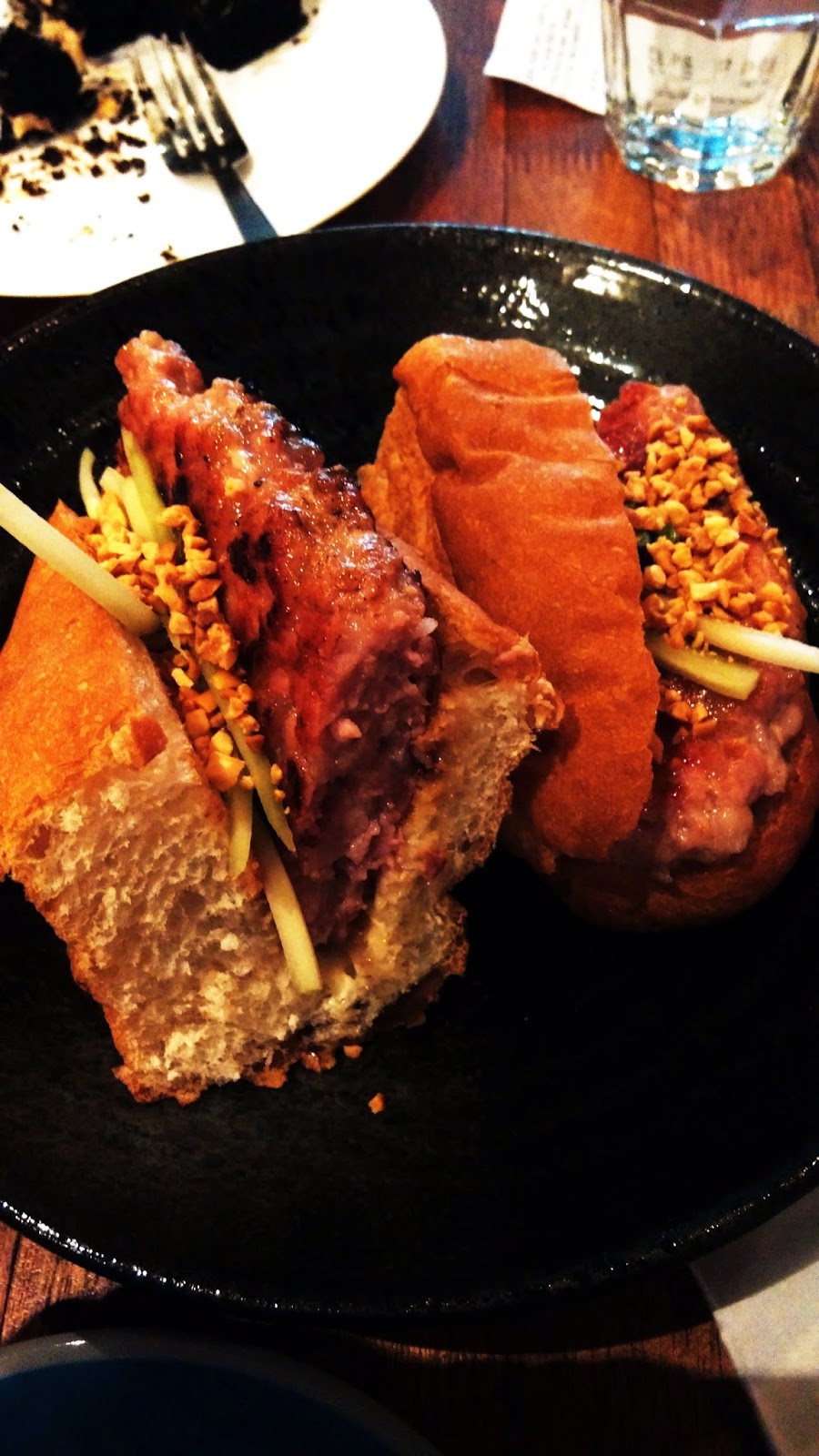 V.D Roll -- RM13.00
Yeap mom recommended this!! And it's awesome!!! Crunchy and succulent veggies and tender meat patties, together with the fragrant bread roll. Also, a bit of peanuts to add the crunch
Like like like!!

Food and coffee are actually not bad afterall, really thumbs up for the VD roll. Ambience, hmm, maybe I went there at the wrong time, it was too crowded and noisy. Maybe a weekday afternoon coffee break would be suitable when there's less people.