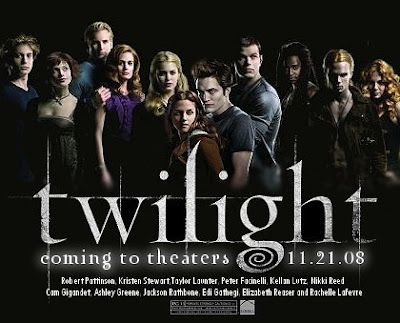 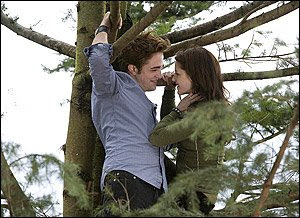 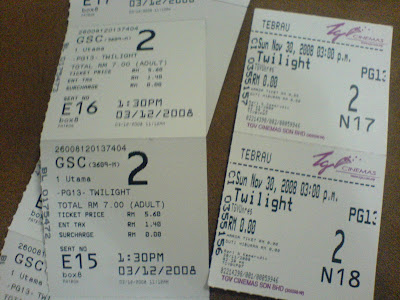 Watched it in different cinemas 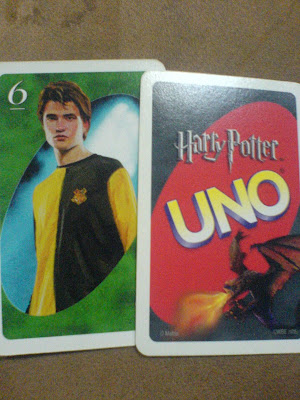 Robert Pattinson on my UNO Card!! XD
Anyway, it's Cedric Diggory.....the boy who got killed =(
Harry Potter's rival.
watched Twilight for the second time!!
i'll talk about what happened today in the next post,
after getting all the pictures from our stalker Carena.....
i really want to talk about the movie rite now.....
i've got so much in my head after watching it for the second time
it seems a little bit different by the way,
coz i'm watching with my friends (and other ppl)
who actually had some knowledge about the story
i still remember the first time i watched it,
it was with my cousin, Zack on last Sunday,
in Johor Bahru, where my cousin live,
that place seemed to have more chinese educated ppl like Zack,
who don't really read eng novels,
so not many of them know about this movie,
and i actually had a great seat in the cinema
really little ppl in it, not even half full, even on Sunday!!
so when i watched it, i actually found some parts funny,
but i couldn't laugh out loud
coz the ppl who were watching don't understand the joke at all,
i saw small kids fall asleep
and i should half-blame tgv for their subs.....really soft subs
i bet Zack won't be asking that many questions
if we were watching in gsc.....
so today i laughed a lot during the movie......
a lot but not that insane like Carena Lim
she sat beside me and
she almost laugh on every line that has been spoken.....
well she haven't read the book yet, i'd lend her mine just now
so today's movie was still very interesting
but i had been more observant,
(i finally spotted Stephenie Meyer!!)
well, maybe i've got some problems with my ears....but
i never heard the word "Twilight" in the movie
i think they should show why this movie is named "Twilight"
although not every movie title appears in the script
i noticed more deleted scenes and that made me more upset
i can still remember how loud was Saywei's voice
when the kissing scene appears to be deleted
"OH NO!!"
yea, i actually had a silly hope that GSC's will be different
but of course it's still the same,
and i noticed that the scene where James was dismembered
was just too short and blur......
and actually there's more
and it's much more cruel.....
but carena was already soft-screaming when Alice twisted James' head
(instead of cutting it off!!--which should be shown)
BOO Malaysia's movie editing!!!
i rather they just rate it as 18PL and don't cut anything
i'm quite confiedent that all of us could easily sneak in
so the deleted scenes were the first to complain.....
and all this i would blame Malaysia's weird movie editing
and the next thing that i'm quite disappointed was the storyline
blame the movie production company now
they've made it too short.....
the most interesting part of the conflicts were missing....
especially the part how Bella escape Alice and Jasper to find James
it's just too easy,
the book's version was simply heart pounding
it shouldn't be missed
then......there were some details that they've changed
but it will affect the next movie.....
wonder how are they going to edit the story
like Jasper was in the ballet studio, killing James
while Bella's blood flowed like river
how are they gonna talk about Jasper's self-control
in the begining of next movie
there were still a lot of changed details i've noticed
which will affect the movies of NewMoon & Eclipse
OKAY, i think it is enough......
lets talk about the Good Points
First, i really like all the casts
especially Alice Cullen's -- Ashley Greene
i think she's perfect and listen to her voice!!
i don't really know why but i just love her =)
and others are kinda nice also....
Edward and Bella......
i really doubt there is a perfect HUMAN to portray Edward
but Rob seems enough......dangerously hot and handsome and strong
Bella, i think Kristen Stewart is okay and enough
though some ppl might think she should look more ordinary
but she has to look pretty somehow, because in Edward's eyes..
she is more than pretty, she's beautiful
well others...... "Good Enough"
Daphney thinks that Carlisle(Peter Facinelli)
is much more hotter than Edward =)
yea.....i'm 99.9% satisfied with the casts
kay next good thing.....some scenes that weren't in the books
okay....i really like the part where two of them ran up the trees
that's so extreme weih, just like Bella said,
THIS ISN'T REAL
yea,,,,,,there were some jokes about the pepper spray
and i think i laughed like a SA PO
Afterall.....i think it's still very very nice la
if you don't compare it with the books....
it's actually a great movie....
but of course they should spend more money
on special effects and photography
i think NewMoon will be very nice and exciting and dramatic
hope the casts will remain the same
i wonder who will be Embry and Quil...
and The Volturi ppl
and Alice is gonna be a major character
so much more fresh points.....
i'm anticipating already...
hope we get to watch it next year.....