okay i actually have a couple of movies to review, but since most of them are already not screening edi
so I might as well move on to this recent one first.
And yes I think I really should give some credits to this Singaporean movie

Ah Boys to Men I and II 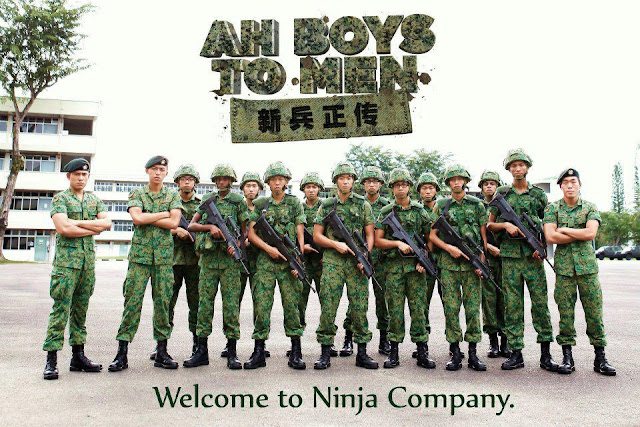 So basically most people around me were telling me how awesome the first movie was, and I couldn't understand how on earth a story about army boys with green helmet and green shirt can be interesting? I knew they will talk about friendships, but just, u see those everywhere right? But I was wrong, the story wasn't just any ordinary story about friendship, it was a heartfelt representation of brotherhood in army life. I can assure you the emotions and process are more sincere than u think!

Anyway the two movies still centered in different themes. For the first, it's more about the process of growing up and also family. For part 2, Brotherhood is the magic word.

Just a short introduction for Part 1 :
It's a story about army life and how it changes transforms a person. The story starts with Ken Chow who is a childish, spoiled and bad tempered 18 year old boy who is reluctant to serve NS. Basically he, along with his mother, find all sorts of way to escape NS but God knows what it takes to be exempted from NS. So upon entering Basic Military Training, he continued to avoid himself from all the tough courses and routines by feigning weakness. His dad was against of this idea, as he knows that NS should be a process to strengthen Ken both physically, mentally and intellectually. There was a constant quarrel and misunderstandings between the two due to difference in perspectives. So at one point, Ken was dumped by his girlfriend and tries everything to get her back, even though it means he has to leave the BMT. For that, he made himself ill by not drinking water in order to get out. Little he know that dehydration can be so life threatening and how his mischief had made so much trouble to others, especially the one that truly loves him...... Review:
lots of interesting characters were introduced in this first film. It talks about the thoughts, perspectives and behavior of young boys towards National Service. The beginning of the film depicts a war scene in Singapore and points out the importance of the army force in protecting the people and nation. Quite boring I must say, it was too long, at one point I just wanted to click "pause" button. But I went on anyway, and the story was brought out. Funny scenes and lines from Ken's mother (Irene Ang) who is a typical Singaporean mother who doesn't want her son to undergo NS. The Jack-Neo humor was everywhere haha, from the parent's advice, to the songs, the commands and insults from army officers, laughed so bad throughout the show. The characters were awesome, the way they walk and talk can simply crack you up. Every character are different but charming in many ways. My favorite? Sergeant Ong la of course!!

Main Cast
Yeng lerr....apparently they are all newcomers and quite a number of the casts are blogger and youtubers!

Nevertheless, the story still delivered several important message in the most audience-friendly way possible. Like national pride, family, and perseverance. One of the main lessons that I think guys should really learn is to man-up when facing challenges or failure. Don't act childish, but face it head front and move on!

Moving ON, the part 2 introduction:
Well after Ken's father suffered from partial paralysis due to a stroke when he was on the way to the hospital(where Ken was admitted). Ken decided to work his best while serving in the army. However, this decision put him on the other side of the line, apart from his sectionmates led by Lobang King. His sectionmates feel that he is trying to impress the officers, just like Wayang King. Conflicts arose despite Ken's kind heart to help. Lobang King and other sectionmates got involved in a feud with a bunch of gangsters (where one of the member stole IP Man's girlfriend). Their friendship was tested during the course of events and they realize they have become closer than they think......

Review :
I love the second movie more, much more coz the main point of the story was emphasized. I just love how the story develops and how their brotherhood slowly forms and strengthens as they face different challenges, conflicts and trouble. The characters were just awesome, they were outstanding in this 2nd film, each with distinct personalities, style and vibe. Their interactions and chemistry were just amazing. I can't help but to wish I have a bunch of friends with those characters within. Anyways, the main emphasis was the friendship between the comrades. How to build, maintain and treasure those relationships. Everyone has their character, to blend all of them together, it means changes must be made, generous heart is needed and readiness to make sacrifice for the team. It just shows how one cares for another and stand as one team. They really presented it in a fun, heartwarming and touching way. Besides that, the humor in this movie, fuhyoh, I laugh non stop la seriously. The characters, what they do and what they say, you just can't keep your mouth closed haha. Especially those stupid and childish things they do with their weapons, the mischievous thoughts and acts during training, and again, those funny insults from the officers. It's just fun and entertaining.

and gawd, it makes Singapore NS sounds so good haha, I think most Malaysians are wishing that they get something similar haha... 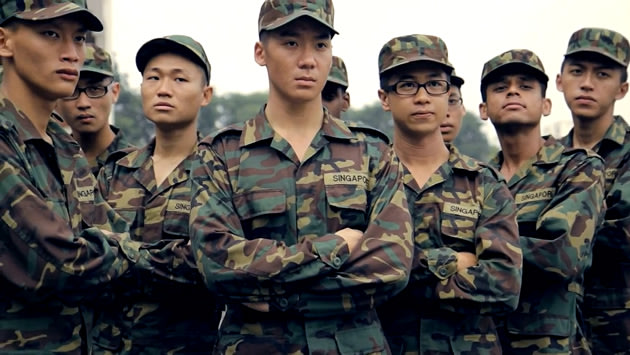 For those who haven't watch, I really do recommend this movie. Especially we young people should watch. I think people nowadays have some degree of self-centered-ness. Sometimes we just don't care or don't want to care about what people say. and people just forget how it feels to open your heart to others and work together as one. Really recommend this movie if you're looking for a funny, entertaining yet meaningful movie.

Now, one of the best things from the film
The themesongs! Both composed by the talented Sergeant Ong, Tosh Zhang
check out his youtube videos here. http://www.youtube.com/user/Tosh13