One last post before mugging starts... just gonna share the photos we took during our double birthday dinner :)

Had our dinner at The East Bureau @Marina Square. If you know Supply and Demand at Esplanade, you will find them having similar style though different concept, yes they are from the same team. Was initially intrigued by their menu, which has many spin-offs of Asian dishes, especially Southeast Asian ones. In fact my group of girls actually prefer Asian food over Western, so this place was perfect haha. The ambience has a similar vibe to Supply and Demand, but more traces of Eastern elements. By the way they called it Rooftop Dining and we initially reserved an outdoor table, but we changed our minds due to the heat and to be honest, there wasn't much (nice)view to take in, the surrounding skyscrapers blocked most of the cityscape. 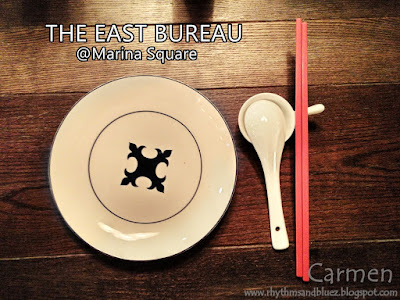 Red color chopsticks that many Chinese homes use to have. But on second thought, the chopsticks reminded us of hawker centre LOL 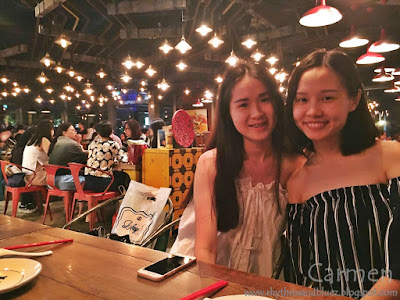 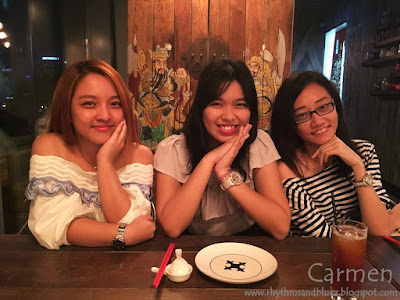 Some painted traditional Chinese wooden double doors behind us. 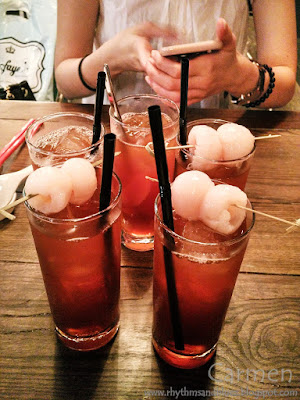 I suppose most people here order alcoholic beverage as there wasn't much non-alcoholic drinks on the menu :( We settled for Iced Teas in Peach, Lychee and Passionfruit flavor (S$5.90 each). I have to say the teas had this bitter-pickery taste. 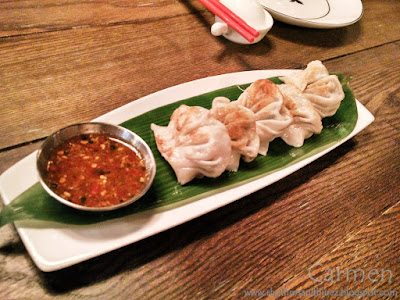 Thai Basil Minced Pork Gyoza -- S$12
This is so gooooooood. Though I'm not sure whether it's worth it to pay almost 2.50 for one small gyoza, but gotta say the gyoza taste good and the sauce was the bomb. Love the sweet, tangy and spicy sauce, with my favorite aroma of lemongrass. We even dipped other food into the sauce haha. Finished one and immediately craved for more. Can you make a larger portion please? 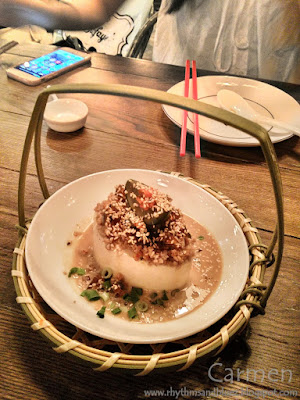 Cold Tofu with Century Egg and Minced Pork -- S$9
Interesting presentation, but the taste was just so-so. Still prefer Taiwan's ordinary restaurant or streetfood version. The century egg so little oni :( I remember having like one quarter of the century egg with one thin slice of tofu in Taiwan, which was just delicious. 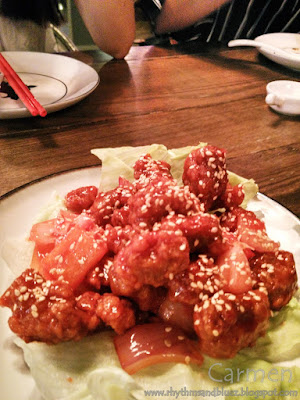 Lychee Martini Infused Sweet and Sour Pork -- S$ 13
Basically it's Gu Lou Yok. It is everything a Gu Lou Yok is, crunchy, sweer and sour, but we could't really catch the :lychee" in it. There's lychee fruit though, but seriously didn't understand the special part of lychee. It does taste good though, just abit disappointed due to our expectations. 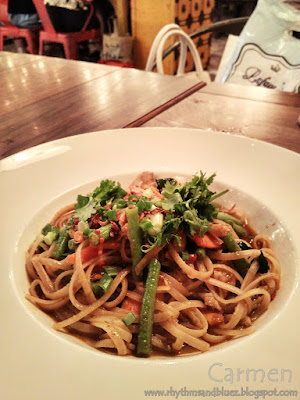 The Jakarta Post (Chicken) -- S$18
Favorite of the night hehe. It's basically, Rendang Spaghetti! I LOVE anything RENDANG, especially the delicious sauce with the heavenly mix of spices that has been the best companion to my nasi lemak. Now imagine having pasta that absorbs all the flavors. This dish is so good OMGGGGG mouthwatering now as I think back. But I would say this is a personal thing, not many people share my taste haha. 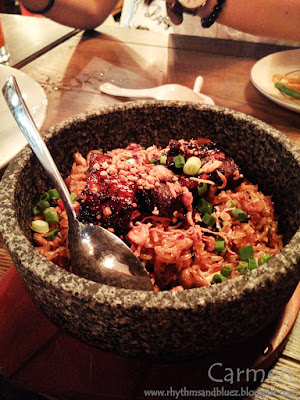 Glutinous Rice with Roast Pork -- S$17
Not sure if the rice is suppose to be hard and abit too hard to chew, wasn't a big fan of this. It smells good though, just that I don't really like the hard, dry texture of glutinous rice. By the way, generous portion, I think this could be shared by two girls. 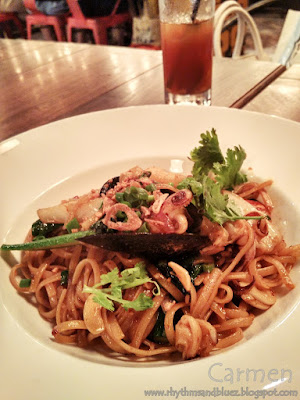 Oriental Aglio Olio with Seafood -- S$24
Finally, pasta in Zi Char style. Why Zi Char, coz it's so greasy, which I thought was weird because usually I can take aglio olio well. Don't really like the greasy sensation and I suppose there wasn't enough 锅气 WokHei. But I do like the spicy flavor and fragrant aroma. Love the texture of both pastas too! 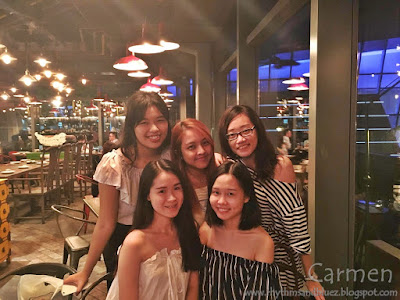 Overall, still enjoyed the food and the ambience. Though the items are a little bit pricey, but at least they taste good. And if you like a view of Esplanade, the outdoor dining isn't a bad option after all, and apparently you can watch the F1 Race over here. 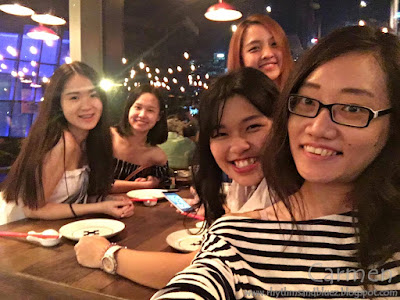 Very Cliche to say this but: Awesome food with awesome companion.

After that, we explored around the area and ended up at Esplanade. Bought a cake beforehand and we were looking for a place to savor the cake. Found this pretty little cafe called Suzette at Esplanade mall. But gotta say we were very paiseh, the cafe has like a wide range of cakes on shelf and we shamelessly brought our cake into the cafe haha. But the staff was nice enough to let us eat our own cake. We ordered coffee drinks instead. The cakes from the cafe look really good though, definitely gonna try it some day. And the ambience of this little cafe is so dreamy, pretty and cosy. 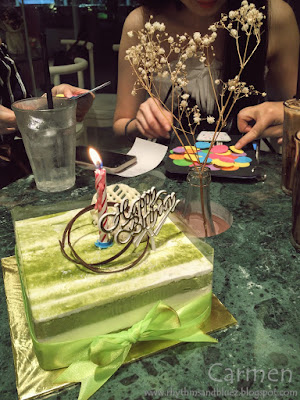 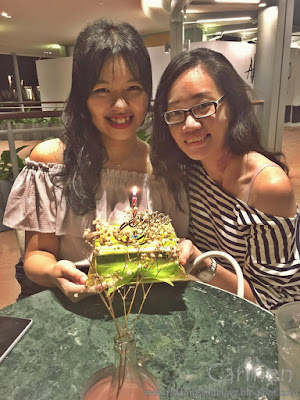 Yay a birthday cake and birthday song from you all! 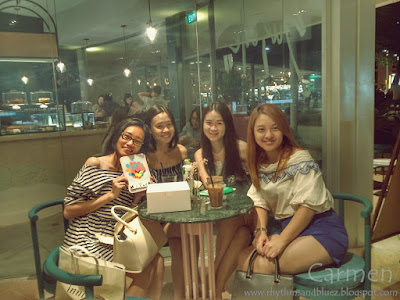 One Table, 5 Chairs. All we need to chat like there's no tomorow haha.

In case you are wondering what you can do at Marina Square's rooftop garden... 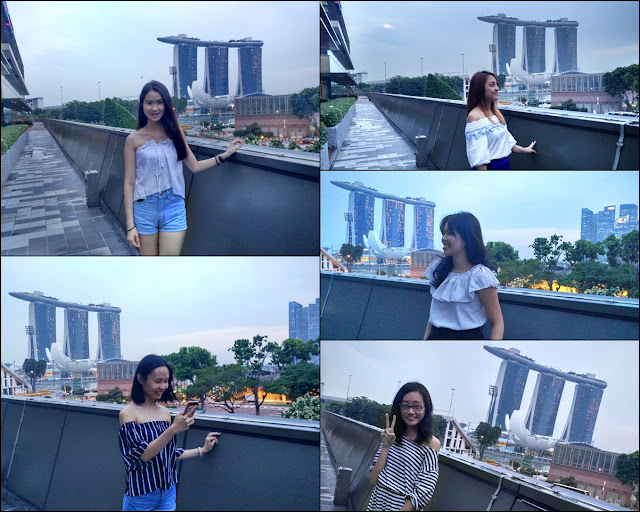 Photoshooting time. These are all #nofilter shots. Not bad right? But this spot/angle was the only place in the whole rooftop garden that is worth a photo LOL.


Mugging time starts...
this blog will be dead for at least another 3 weeks, can't wait to continue writing. Have so much more to share hehe.
Posted by Carmen JW at Saturday, November 12, 2016