Who Are You to call Black Eyed Peas STUPID???? 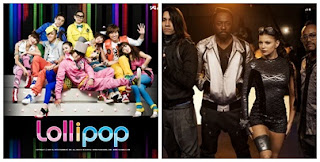 I LOVE BIGBANG + 2NE1 + BLACK EYED PEAS
Happy Christmas Everyone!!!!!
I'm stuck in house, mummy says it's TOO BLOODY-STRAWBERRY JAM outside to go out.....
so as usual spent my time fb-ing and watch some videos on YouTube
and for the first time, I MET A person who kinda pissed me off on  YouTube...
I was watching this video of a Performance by G-Dragon, TOP ft Bom from 2ne1
They are awesome isn't it??? 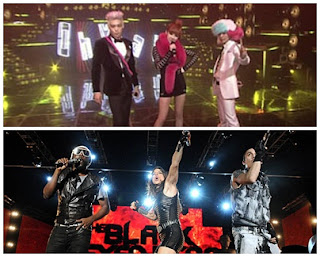 So I left a Comment (The yellow highlighted one):

see what the "edwardismylove" commented.....
In case you can't see,
Edwardismylove replied me :
You are so dumb, you are really really dumb
THEY ARE BETTER THAN THE STUPID BLACK EYED PEAS lmao wooowww
and the fact that you don't know gd&top are members of bigbang and park is by herself...LOL


I WAS SO BLOODY UPSET
NOT JUST BECAUSE THAT HE/SHE JUST CALLED ME DUMB
BUT SAYING BLACK EYED PEAS IS STUPID,
AND HE/SHE THOUGHT THAT I DON'T KNOW BIG BANG AND 2NE1,
AND MORE.....I CAN'T BELIEVE 4 PEOPLE THUMBS UP!!!!??????
I was cursing infront of the comp
and I talked to my brother right away cause I don't think I can tahan anymore
I was gonna burst if I don't say this to someone.....
I told myself to let it go,
but seriously I can't accept the fact that he/she calls people dumb
and called a world-class super star stupid without looking in the mirror
SO I REPLIED HIM :

I was actually waiting for him/her to reply.....
then I SAW THESE REPLIES
AND THERE, MY HEART STARTED SMILING =)
At least I know I'm not alone...

Really wanna thank these people....
My Reaction was "Ha!!! See?? OMG that means you just said that your Awesome 2ne1 is working with STUPIDS??"
I HOPE THE "EDWARDISMYLOVE" SEES THIS
I have no offense with this "Edwardismylove" in fact I understand that he/she is just like any other fans who tried to defend for their idols.
But don't you think it's too much to call people dumb just because of a simple opinion?
I mean, It's not like I compared them to some suck-ish band.
I compared them to BLACK EYED PEAS!! These 4 people have toured around the world!!
and you call me dumb.....
And and how can you call an artist stupid??
They've wrote their own song, created their own music and performed for us
even if they suck in academics, do you seriously think they deserve to be called stupids??
I guess you didn't check the dictionary before you use the word....
You can say that BigBang or whichever-Idol-you-love is better than Black Eyed Peas cause that's your opinion..... But don't call them stupids when you don't even know who they really are....
Again, I love BigBang, 2ne1 and Black Eyed Peas and will always be a fan of them =)
Merry Christmas....
Posted by Carmen JW at Saturday, December 25, 2010