Why does all the awesome k-drama have to come out at the times where I'm having exam?????
I told myself to study hard but when Thursdays come, all this willpower just crumbles into dust in one second.
And this time, who did this?? City Hunter

City Hunter
Currently airing in Korea.
It's such an awesome tv series I tell you.
I wasn't very impressed when I know the story will be about revenge and stuffs. But when I know Lee Min Ho is the main lead, hehe...definitely shouldn't miss it la. But after watching the first episode, totally fell for it man. Not because of Lee Min Ho's good looks (but it's still one of the main reasons XD), but the whole story line is just so interesting. I must give credits to the writer, a story full of conflicts and interesting relationships issue. It's not wholly about revenge, but it talks about justice, guilt, dreams and sacrifice and of course, Love.
The complicated yet interesting relationship between the characters is the best thing i tell you. Most of the characters are inter-related and they all have a responsibilities towards each other and there's a lot of hidden truth and secrets between them which makes the story very fun and full of ups and downs. But I can assure you, it's not like those over dramatic and sad-sad story. There's a lot of comedy and lively acts as well. Oh at the same time, this series has a lot of action scenes. Which is so "yeng", especially Lee Min Ho's action scenes!! Really wanna share this awesome film with you guys! 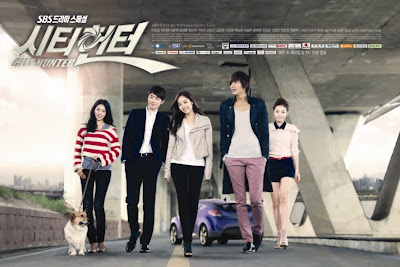 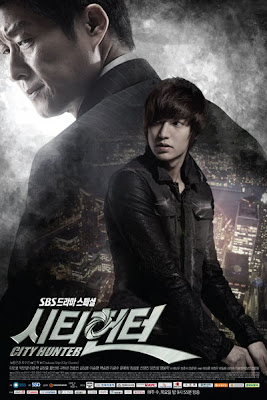 Synopsis:
The story takes place in Seoul, 2011. Lee Yoon Sung is a talented MIT-graduate who works on the international communications team in the Blue House. He plans revenge on five politicians who caused his father's death with his surrogate father Lee Jin Pyo and eventually becomes a "City Hunter."
source: http://wiki.d-addicts.com/City_Hunter

Yea I would like to add my synopsis as well LOL
It's not just about revenge. It also tells the story between Yoon Sung and NaNa(by ParkMinYoung) where Yoon Sung has feeling towards NaNa but can't express it, in order to protect her form harm. Yoon Sung kept his City Hunter identity as a secret, nobody knows it but SaeHee (HwangSunHee) who was always his life-saving angel. So yea the storyline goes about how Nana and others like YoungJoo (JoonHyuk) slowly uncover his true identity. And also there's a debate about whether to crown the City Hunter as a Hero or a Criminal, whether they should accept his way of punishing the guilty ones. YoungJoo was Saehee's ex-husband, the reason they divorced was because YoungJoo only cares about his work. Both of them still have feelings towards each other but at the same time YoungJoo is also interested in Nana as well.
So yea, told u the relationships are very interesting!!

Hot Guys and Pretty Girls
Where can you find a better cast???