Venice is such a beautiful place and I wish I'm in Venice at the next second...
Went to watch The Tourist with some of my friends yesterday to spend some time with them at the last few hours of 2010.
The movie is starred by 2 of my fave actor and actress, really put high hopes in this.
This movie falls in a romance-thriller genre, but after watching I seriously don't know why it is in the genre.
Not very romantic and not thrilling AT ALL!! I don't know maybe I expected something more after watching the trailer of the movie. There's abit of humour though which made me laughed a lot. But from I see, I think there's alot of deleted scenes so I probably missed the best parts...

The only thing I'm fascinated about this movie is the setting, they've chose the beautiful Venice as their background and Gosh, the scenes are breathtaking (at least it is to me, for I am a girl trapped in Malaysia for 17 years)

A remake of the 2005 French film "Anthony Zimmer" starring Sophie Marceau, this Hollywood romance-thriller revolves around Frank (Johnny Depp), an American tourist visiting Italy to mend a broken heart. Elise (Angelina Jolie) is an extraordinary woman who deliberately crosses Frank's path in order to mislead all those who are following her former lover Alexander Pearce, a criminal wanted in 14 countries, who has stolen money from a gangster (Steven Berkoff) and who is being pursued by an agent (Paul Bettany). Against the breathtaking backdrop of Venice, Frank pursues a potential romance but soon finds himself the pursued as he and Elise are caught in a whirlwind of intrigue and danger.
I was kind of dumbstruck by the ending LOL because it turns out that Frank is Alexander Pearce after Face implant and voice chip implant etc etc. and he planned all this from the beginning, I guess even Elise didn't know about it.
The good thing about the movie is that it gives pretty much surprises such as the ending and also the humor that happened during the climax. You will know what I'm saying after you watch it. The climax was funny instead of thrilling LOL. I think the surprises are the best part =) 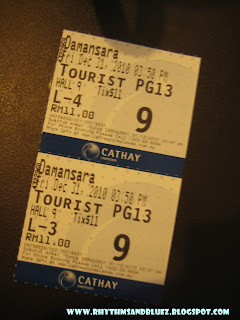 Well after all the movie is still nice, despite the lack of romance and thrilling events. At some parts it got kinda boring till i was going to sleep. But I think the movie is still beautifully filmed and the story line is okay too. The cast rocks!!! That's my opinion about this film =)