basically, I just think the idea behind this movie is quite awesome!! It's sort of like one of it's kind.
I'm talking about the movie named Pacific Rim

Simple Intro (I wont talk much about the details, coz you should watch it and understand yourself):
Basically it's about an alien monster species that invades the earth and caused much devastation. To fight these monsters, humans created their own mega robots which they refer them as monsters with a named called Jaegers. Humans control these robots with their own movement. Erm so the climax of the movie is when the monsters are getting stronger, the Jaegers have to find a way to stop all the attacks once and for all. What I Think :
Basically, I think it's quite an interesting science fiction movie in these years. Interesting but still understandable.The only thing that I don't like is that the movie has too much CG, but of course, I don't blame them larr, coz it's a movie about Giga-sized Robots and Monsters. I really do like how they presented the movie, especially the colors. I don't know how they do it, but the colors have a very striking hue and yes it brings out the sci-fi vibe of the movie. The action scenes are quite awesome as well, yea growing up watching power rangers and ultraman makes you always crave for awesome "superpower" or "super-technique" or what I call it 绝招。The robots pretty much have all the yeng 绝招。hehe...Other than that, the characters are quite cool as well, it's quite a complete cast. It involves warriors, pilots, scientists, technicians and even gangsters haha...
I just like how all these characters are like a package towards the goal of the story. Everyone is important. Gipsy Danger, the name of the Main Jaeger of the story.
All the robots have super cool names larr...

Really recommend this movie if you are a fan of super cool battle robots which you can control. It's different from Transformers, like really different, the idea itself is already diff so there's no way to compare. One is robots from another planet and a human boy that saves the world, this one is about HUMANS BUILDING+PILOT THEIR OWN ROBOTS to save the world. See the difference?
anyways, I do think this movie is like Gundam + Inception
I didn't talk much about the inception part, you should watch it and find out yourself hehe... 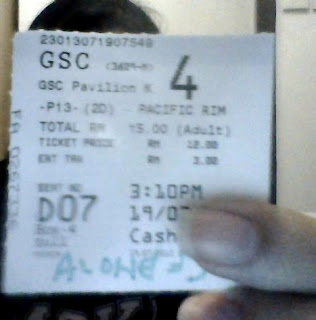