OMG I've been waiting for this for ******* Years and finally it's happening!! 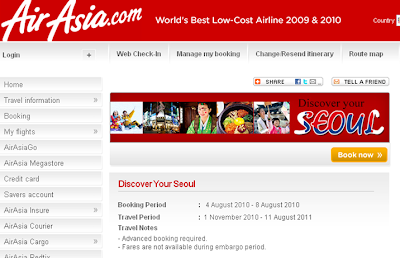 One of my most-want-to-achieve dreams is to go to South Korea and preferably the first overseas destination that I'll go...and now I can see this dream is gonna come true. I've been whining at least one sentence per day about going to KOREA and my mom was so annoyed about it because we can't afford to pay for the MAS flights coz it's bloody damn expensive and even if we can afford the flight, we'll probably have to sleep on the streets. Yea so despite my constant whining, I didn't really really demand to go there, but now.....hehe....I'm gonna bug them until they book the flight....
Thank you AirAsia!!

The One-Way Flight costs RM99.00 of course not including tax and THE HIDDEN CHARGES
Booking period starts tomorrow and ends at 8th of August, travel period is from November to next August 2011.
For more details, check out AirAsia.com

I know some of you might think AirAsia might be not as comfortable as MAS, but HELLO?? It's a low cost flight, what do you expect?? And THE GOOD NEWS IS, they are using the AirAsia X air bus....so the seats will be bigger i guess =)
I'm gonna do whatever I can to make this work... 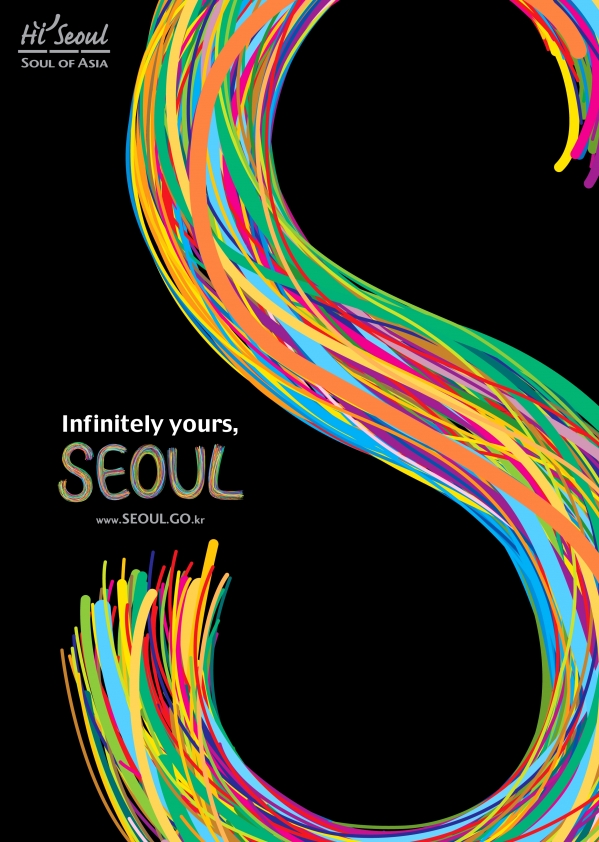 Seoul, Infinitely yours =)
I dunno why but I love their tag lines like :
KOREA, SPARKLING.
KOREA, BE INSPIRED
and
SEOUL, SOUL OF ASIA
OMG I'm already imagining things like walking along the HanGang River :

OhMy, so romantic, this is something you'll never get in Malaysia...
I think the only major river we have in KL is the Klang River, which is very much of a giant drain instead of a river....
Have loads of fun and take loads of photos in Lotte World or Everland

Lotte world a.k.a Korea's Disneyland
many major dramas had filming over here =)
Having a whole view of Seoul at Namsan Tower

Haha this place reminds me of Boys Over Flower
where JunPyo and JanDi got locked in the cable car....so stupid rite? LOL!!
I'm definitely gonna try the vending machine's coffee that Jandi drank LOL
Next. having a nice cup of coffee at Coffee Prince's Shop

whoa this is the place that I really wanna go
I bet the coffee must taste better than StarBucks =)
And of course, SHOPPING! at DongDaeMun and CoEx Mall

The best part LOL!
and also attend a Jazz Show at Insadong, Visit GyeongbokGong, Throwing snow balls at the Winter Sonata spot, maybe visit the film set of DaeJangGeum, Eat lotsa KimChi and their grilled beef, Watch JUMP! show, ohmy, there's just too much to do!
This video shows a general overview of Korea
all the food, destinations, culture...etc etc
makes me wanna fly there now....
This one is the Entertainment Themed Tour Commercial
oh my gosh, if i could i'll definitely want to visit MusicBank, MusicCore or Mnet's Show for once!
This is the sweet and romantic Ad featuring DBSK, Super Junior and SNSD
really wish all of them will do that for me and my boyfriend LOL!!
Seoul is definitely a complete package for travel...
The fusion of urban city life and also traditional unique culture and also fun packed activities.
Hope to see you soon Seoul!!!
Check out their tourism website =)
Posted by Carmen JW at Tuesday, August 03, 2010

Email ThisBlogThis!Share to TwitterShare to FacebookShare to Pinterest
Labels: Interest, Random/Thoughts, Travel While We Young