KDramas!!! Salaryman and The Moon that Embraces the Sun

Yea I've always been a crazy K Drama fan throughout these years but evensince edexcel exams ended, things got worse haha....currently non-stop watching + REWATCHING all the k dramas hehe
anyways, watched some really good ones...
wanna share with you people...

1. Salaryman Cho Han Ji
It's a modern day adaptation of Chinese History's Chu-Han 楚汉相争 that talks about the story of Xiang Yu (项羽) and Liu Bang (刘邦)
Yes it's a KOREAN drama using CHINESE history hehe....really nice!
I really like how they make they make modern day companies as the battlefield.
Love all their tricks....even love their character

Salaryman Cast : Jung Gyu Woon, Hong Soo Hyun, Jung Ryeo Won and Lee Bum Soo
Synopsis:
The story talks about modern day company employees working their best to achieve success, to win in competition, and also their tricks and schemes to claim their rights and status.
Hang Woo(Gyuwon) is trying to take revenge on Chun Ha group where its president caused the death of Hang Woo's father.
Yoo Bang(Bumsoo) was an ordinary employee who works hard to protect Chun Ha group, but after he left ChunHa, he starts to build his own business and stand strong in the industry despite being a small company.
Yeo Chi (Ryeowon), the granddaughter of ChunHa's president. After the death of her grandfather, his secretary came into power. Knowing that the secretary must have changed his grandfather's will, she decides to take everything back with her own hands.
Woo Hee (SooHyun) is a kind and helpful friend of YooBang and stands firm for justice.

Jung Ryeo Won and Lee Bum Soo are awesome larr!!
They can seriously fit into any kind of characters
In this show, ryeowon is the daughter of a Pharmaceutical Company that speaks foul language all the time LOL love her character...n Lee Bum Soo, never fail to make me laugh...yet when things are serious, he's acting, 3 words, LIKE A BOSS.

hehe...someone new to me
Jung Gyu Won who act as Hang Woo in this show...
At first I kinda dislike him since he's like villain, but after that I find him really cute and I really like how he showed all his love to the woman he love. so touching.


2. The Moon that Embraces the Sun
Thumbs Up!!

super super touching story....
cant forget all the beautiful scenes of the drama
and seriously, I think about it when I sleep...serious, when I'm not thinking about something else, all the scenes of the show will just suddenly appear in my head...
I'm dead obsessed with the show.
however I actually didn't watch every single minute of the show since I was a bit too "Gan Jiong" to know the  ending, will REWATCH this soon!!

Cast : Kim Soo Hyun (Left), Han Ga-In (right), Jung Il Woo, Kim Min Seo
Synopsis :
A long lasting love story between Lee Hwon (SooHyun) and Hur Yeon Woo (Ga-In).
very much twisted by fate, many sad events happened that pulled both apart.
But fate put them together again, but as they get closer, the more dangers that they encounter.
haiya in simple words, a very beautiful and touching love story. 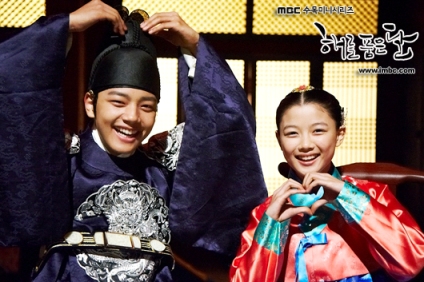 Lee Hwon, the crown prince met Yeon Wu when they were young and fell in love with each other. Both were destined to be the Sun and the Moon of the country, and in fact Yeon Woo was crowned as the future princess due to her intelligence. But a few days before their marriage, a death spell was cast on Yeon Woo and she died of illness a few days later. The prince was deeply hurt and live a sad life. It turns out that Yeon Woo was rescued from the grave but lost her memories. Fate made both of them meet again and the Prince starts to doubt the real reason behind Yeon Woo's death.
Anyways, see the photo above? yea they are the young Lee Hwon and young Yeon Woo. Must give them some credit, they are only 15 and 13 but my gosh their acting....Thumbs Up!!!
I cried so bad during the scene where Lee Hwon watches Yeon Woo being chased out of the palace.
They are seriously good weih, in fact all the young actors are good. The young Princess MinHwa, young Prince YangMyung....awesome larr!! They can cry like the adults!!

the kids are already good, the adults of course are even better...
I love how they can just tear up without looking to fake.
seriously very touching...
Kim Soo Hyun, didn't know that he was so good...i mean like he's only 24, so young but his acting is just wonderful larr!! Really "gamdong". And Han Ga-In, I really love her previous roles in "Super Rookie" and "Yoohee the Witch" but this Yeon Woo is a very different character, so much emotions, she did really well. and she's so pretty, no wonder my brother still love you so much after so many years hehe
The storyline is good, very interesting and full of ups and downs, and it makes you anticipate the next episode. The characters are all good, still feel very impressed with all the actors' skills especially how they express their emotions and thoughts, how they try to hide something but still show it. Every character has a lot of story to tell.

despite all the heartbreaking moments, there's still funny and cute parts and also cute characters
Hyung Sun the eunuch is the cutest! (the man at the centre)
brought so much laughter into the show.
well the main characters can be quite funny at times which makes the show much lighter and less moody.

homg dont you think Han Ga In is beautiful?
not just pretty, but Beautiful! despite her age, she's still a good match with Kim Soo Hyun hehe 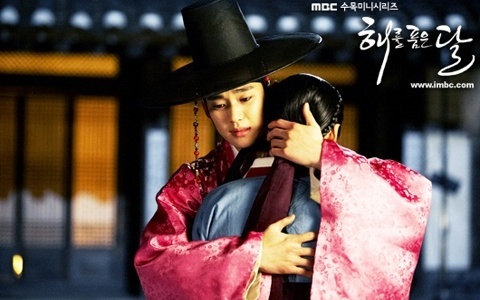 
well actually instead of watching new dramas, I'm rewatching a lot of dramas...
From Rooftop Prince, City Hunter
the next drama that I wanna rewatch is this one

Personal Taste 2010
just like The Moon that Embraces the Sun
it's also adapted from a Novel
this one, even though fictional, but seems very much real
not like those love stories full of ups and downs, tragic incidents..
this one is just ....real and sweet

okay I'll rewatch it when I have time, watch this if you haven't watch it :D