Never felt so proud before

I'm sure the buzz now is all about Lee Chong Wei's Awesome Performance in the Olympic Finals
this is like the first time where people really didn't care much about losing but instead appreciated and marveled on his wonderful and outstanding performance...
Yesterday was a day full of emotions and thoughts and I really want to write my thoughts down, to remember this terrific day...

Yesterday, my whole family was excited and we even decided to have dinner earlier so that we can catch the match at 8pm...I would just be honest, at first, I thought that his chance of winning was really thin and the fact that he hurt is leg really didn't help at all. I was thinking that I shall support him but not expect him to win coz that might put too much stress on him...Yea, i kept saying "It's okay, dun lose to badly then can edi..."
As the game goes, every second was full of fascination...his moves, his expression and of course his spirit was so high...I can feel it, really! It moved all of us, our whole family was shouting, yes shouting (sorry neighbours) almost heart attack i tell you. We became very hopeful and at the same time, enjoyed the awesome performance between two world players...it was better than any kind of show/movie, coz it's real. Trust me we were super funny, we were like talking to him haha, "Ooi play properly lerrr!!", "Don't so gan jeong!", "Yes Yes You can do it wan!!!" "快点杀球！杀到够够力！" "Walao, 很型！" As if he could hear us LOL

When he won the first game, all of cheered so loud and of course we started to hope for the gold medal.
Then the second match wasn't that good, I could feel all of us sink.... Like really sad for him, then we continued to "TALK" to him...."Nvm, still got one more game, confirm can win wan!"

Then the 3rd game was the best, they were really neck and neck, every rally was super "gan jiong" , u never know who's going to take the lead, at the same time, all the awesome skills were being showcase, speed, precision and techniques, you can really see their efforts and you'll start thinking about how much blood sweat and tears were behind all these...
I really respect both players!

anyways at the end 19-21
I was sad, I'm serious
not because there's no ice cream and holiday
Just genuinely feel sad for him
he did an awesome job, but still it was not enough for him to achieve what he want
really felt like crying with him...
But a few moments later I felt a happiness in my heart
I was so proud of him
every frames from the match started replaying in my head and I cant help but to feel that he really did win
no doubt it was a breakthrough performance
If I could talk to him face to face, I would let him know he achieved so so much from that game and we all see it and appreciate it! 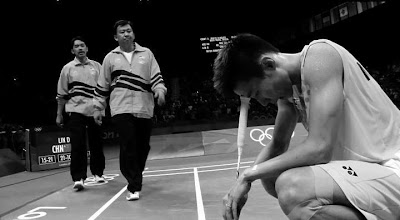 This is the moment where I felt like crying...
he look so down
I think none of us can understand his disappointment

but seriously, you're the best la...
good thing that there's internet now...
I'll show my kids the video of this match and tell them how awesome you are
and will make sure they go learn badminton!!

Thanks for bringing us together and made our country stand out on the global stage!

THIS SONG IS FOR YOU!! YOU'RE THE BEST!

Email ThisBlogThis!Share to TwitterShare to FacebookShare to Pinterest
Labels: Random/Thoughts