Watched Killers yesterday and I have so much to talk about this movie...
Well at first I doubted whether I should watch this one coz I know Ashton's movie are mostly superficial comedies,
but I trusted Katherine Heigl and I didn't feel like watching anything too emotional or over-action (well Ashton Kutcher's face was also one of the reasons larr)

While on vacation with her parents, Jennifer Kornfeldt, a beautiful young blonde, (Katherine Heigl) meets Spencer Aimes (Ashton Kutcher), a good looking single man. The two begin to fall in love, but she doesn't know Spencer actually works for the CIA and in between the times they spend together chases and kills criminals. Spencer decides to quit his job and continue their relationship back home, and they rush into a quick marriage. But when Spencer's good friend Henry tries to kill him after his birthday party, it is revealed that someone had placed a twenty million bounty on Spencer's head......

I must say the movie was visually good because Ashton Kutcher is uber hot.
And I started to melt whenever he calls Katherine Heigl "Honey"
He really showed this nice, caring, loving, humble and sweet husband look.
Demi Moore is such a lucky woman.
In this movie, he's sexy in every way.
Really in every way, no matter when he's a hot and sexy spy-agent or a simple and sweet husband,
no matter he's wearing a tight black shirt, a suit or even a long sleeved button-up white shirt,
all these are enough to make me hyperventilate in the cinema.

I think they should consider Ashton Kutcher to be the next Ethan Hunt.
But I still love Tom Cruise, gonna watch Knight and Day, also a comedy/action film.

Katherine was awesome too. She's always the comedy queen.
and I think she looks better with front fringe rather than side parted hair.
and OMG the way she present the lines...
I dunno how to say, it's just funny and natural.
Very impressive =)

The show was VERY FUNNY as well.
As a comedy film, it passed with an A for sure because all the lines were funny.
The characters were hilarious like Jen's mother who's constantly drinking alchohol and always in a hyped, insane state of mind.
The audience laughed a lot
and the funniest part was the scene where Ashton Kutcher kisses Katherine Heigl's nipples.
That one made the whole cinema literally roared with laughter.

My favorite quote from the film :
Let's just say I worked for the blah blah blah and they gave me the license to blah.

Anyways, that was the good part of the film.
On the dark side, the story failed to make any sense at all.
The climax of the story wasn't that clear after all and the resolution was just too.....
too.....easy....in other words, shallow or superficial.
I mean how in the world your father-in-law manage to have the WHOLE neighbourhood to kill you? Even if there's a 20 million bounty.
And how could someone who is so determined to kill you suddenly just gave up after knowing your wife is pregnant?
And how in the world you didn't know your father was not a pilot but some BIG-BAD-GUY who worked for the CIA but ended up being hunted by CIA??
Well you might not understand what I'm crapping about because the story was very very vague.
They didn't tell you some vital details like her father's detailed true identity,
why suddenly Spencer is asked to kill someone again after quitting his job for 3 years?
The movie was kinda brutal as well, killed lotza innocent looking neighbours...

yea, I'm sure you will think the same way after you watch.
In simple words, the story was very very shallow and vague.
It was hanging sometimes...
But of course it's funny la.
Really really funny!
Packed with crazy and funny lines and thrilling actions.
It's okay to watch with your girlfriend for some sweet laughter.
And there's still a good point of the story :
You have to sacrifice what you have for your love ones. 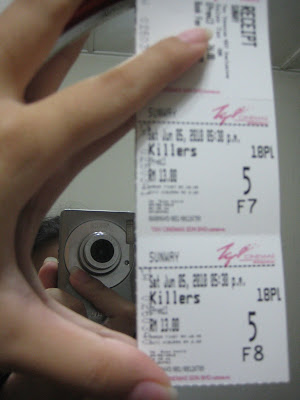 Imagine this guy appears before you when the lift opens...
and he walks in and the lift closes.